In the geographical area of Central and Northern Europe, residential and commercial buildings need to be heated for most of the year due to relatively low temperatures. Energy costs are always higher, so the installation of thermal insulation in the last 30 years has become a mandatory part of every new building, as well as in the renovation of old ones.

There are more and more different types of insulation materials for thin-layer contact facade systems, and the development of these pursues two goals: 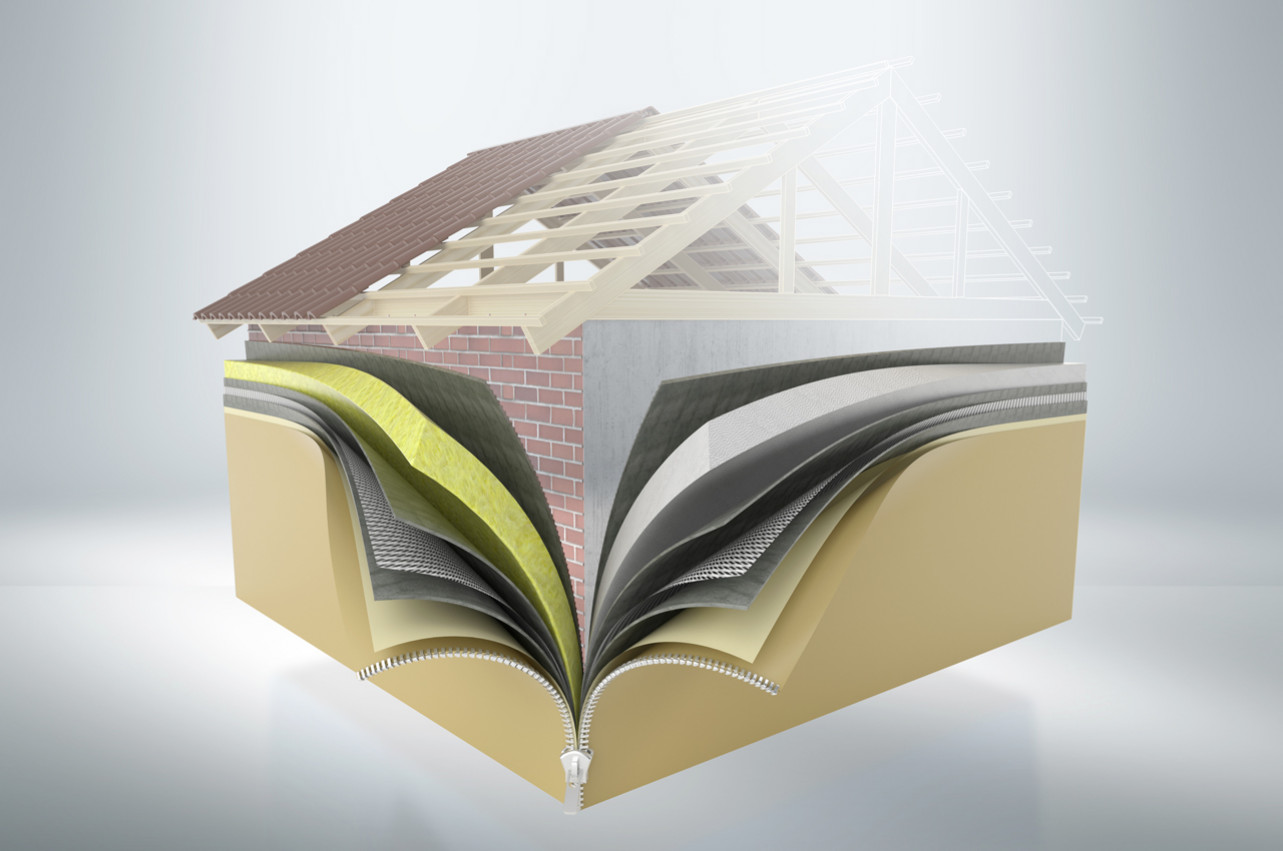 The most important property of thermal insulation is its thermal conductivity.

In the technical guidelines of the national funds for co-financing the construction of the facade, we often come across the concept of thermal transmittance of insulation. Since misunderstandings often occur, let’s first look at the definitions of both terms. 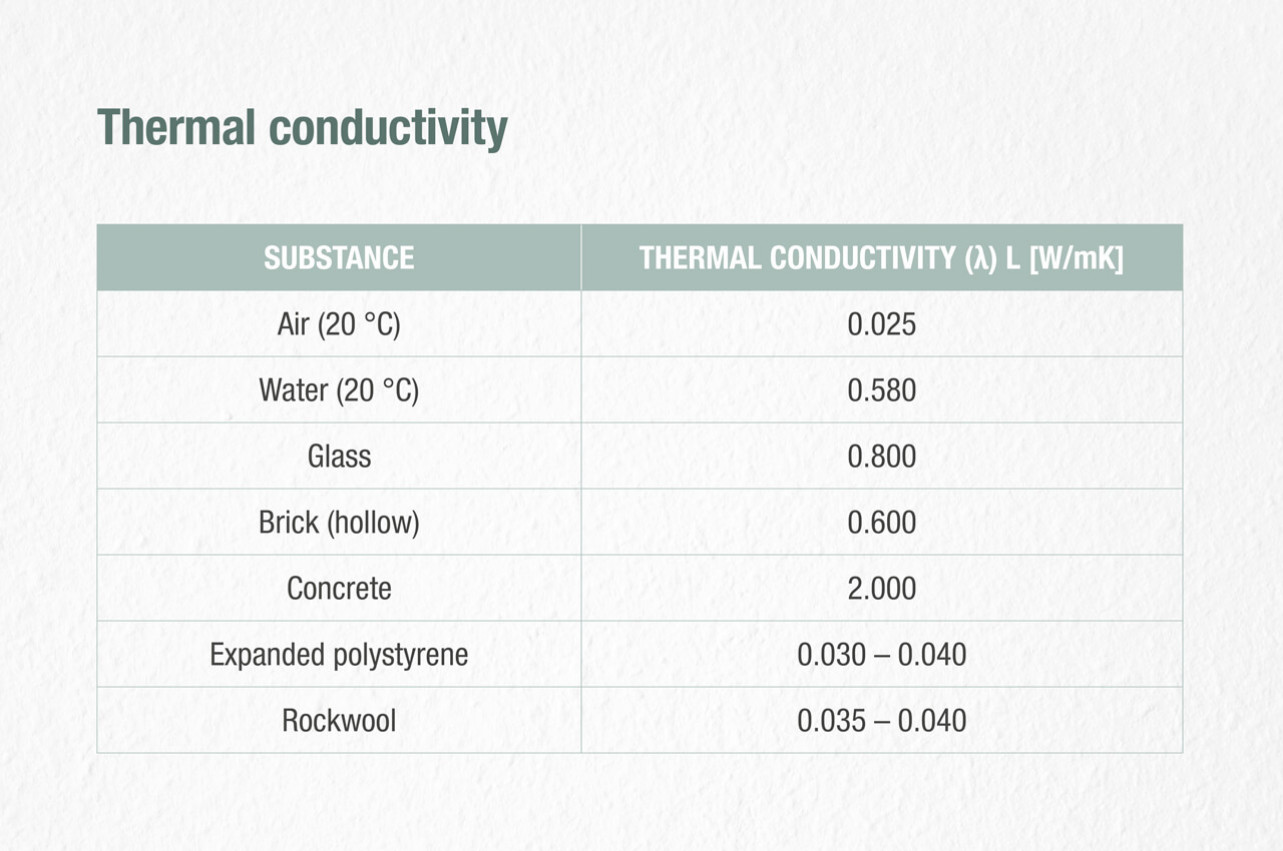 It depends on the investor how much energy savings he wants to achieve with insulation and what kind of living comfort he wants. From a cost point of view, the choice of thicker insulation represents a smaller part of the cost of installing a thermal insulation system, as the cost of installing the scaffolding, finishing layer and all other works and materials represent approximately the same cost regardless of the thickness of insulation boards. It should not be exaggerated with the thickness, as the thermal insulation effect is not directly proportional to the cost of the installed insulation. In addition to the type of insulation, the calculation of the optimal insulation thickness is influenced by several factors, such as the size of the building, the type of heating and the climate of the area in which the building is located. For most buildings, the optimal thickness of insulation and finishing layer is between 20 and 25 cm. This represents an appropriate ratio between the achieved insulation and the price of the facade, and in the long run it also enables a sufficiently high saving in energy costs. The investment in the installation of a thermal insulation is thus recouped in about 4 years. 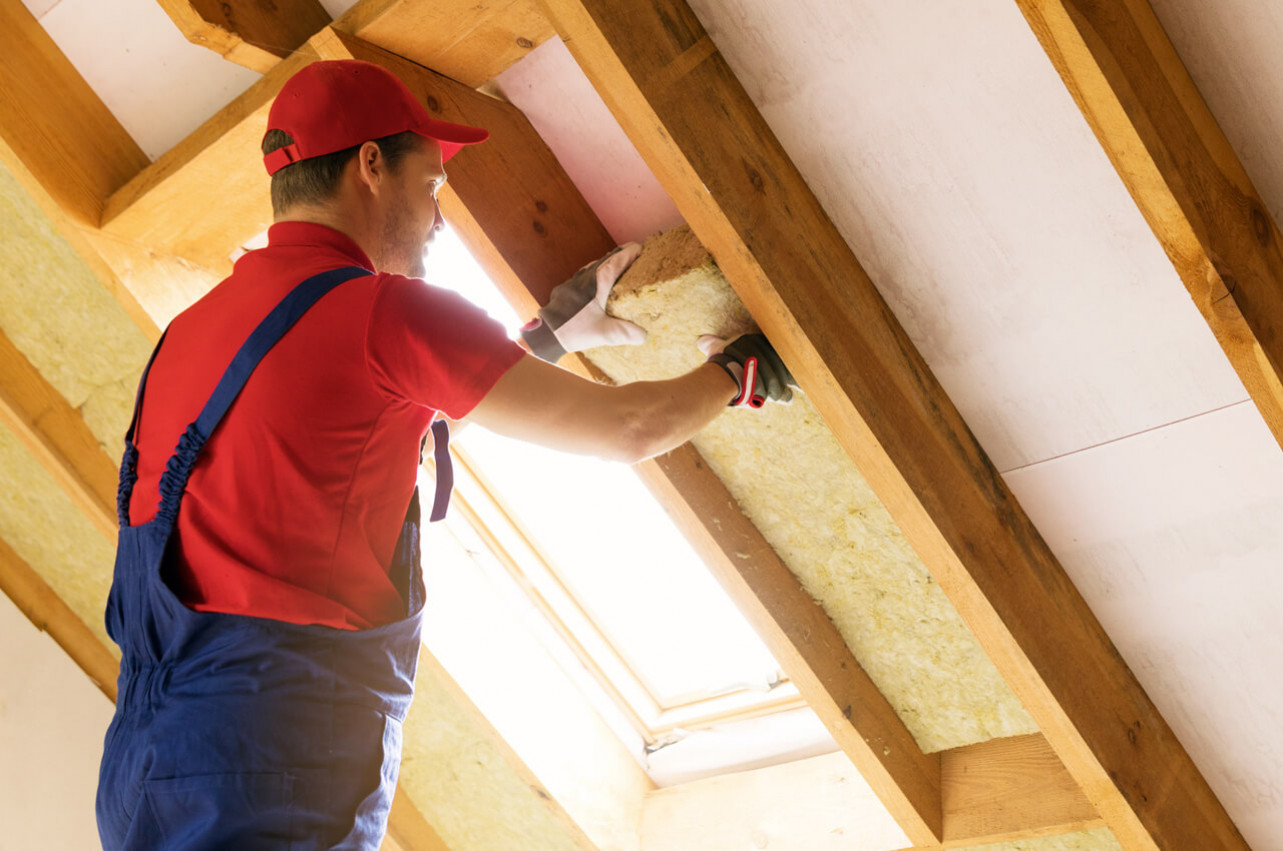 Insulated panels made of expanded polystyrene (about 80% of all insulated facades) are most often used for contact facades, followed by insulation panels or lamellas made of mineral (stone) wool, mainly due to the specifics of the building.

EPS is formed in the process of heating styrofoam granules, whereby they stretch and surround the air with which they saturate the material. Air-filled bubbles surrounded by polystyrene are formed. The material produced in this way is very light and has a very low thermal conductivity. With this procedure, the most common white styrofoam is formed. Styrofoam insulation manufacturers have developed EPS with additions and process improvements with even lower thermal conductivity, lower water absorption, and higher mechanical strength and dimensional stability. In addition to white styrofoam, we also know graphite styrofoam (black or gray), in which the built-in graphite particles reflect heat and thus reduce the thermal conductivity by about 20-25% compared to white styrofoam. Simply put, a 13 cm thick plate of graphite styrofoam is sufficient for thermal conductivity, while the use of the white one requires a plate thickness of 18 cm. Moisture condensation on the inner wall of the wall is also reduced, and due to the higher density it is dimensionally more stable, with minimal water absorption.

Stirodur (XPS) has a more closed structure compared to EPS, so it has significantly higher compressive strength and is more dimensionally stable. Due to its low water absorption and the previously mentioned properties, it is suitable for foundation insulation, perapet waterproofing and floor insulation. It also differs from other insulation boards in colour, which is usually green, blue, pink and similar tones. 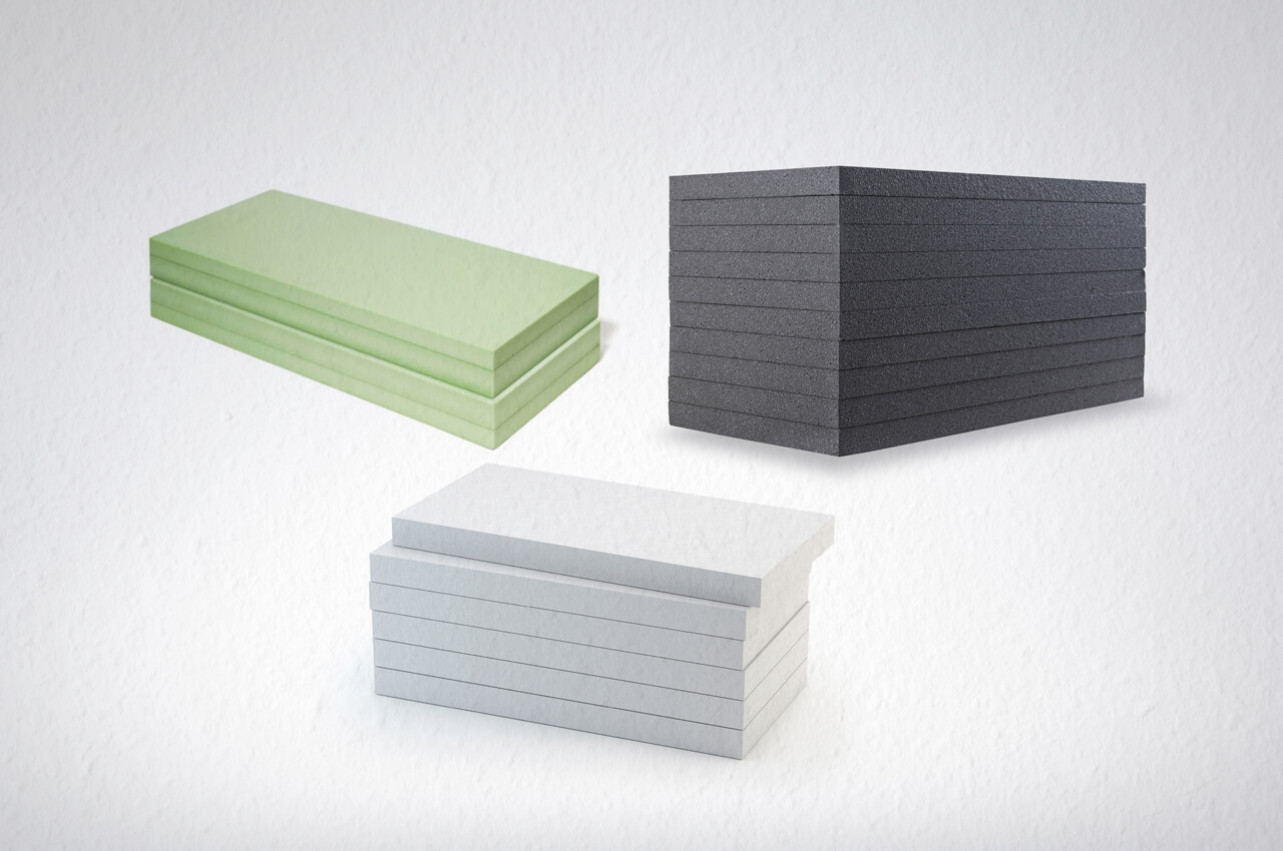 Mineral wool is made from basalt rock, hence its name. It is a vapor-permeable insulating material that acts as a heat-insulating and at the same time vapor-equalizing layer in the contact facade system. Due to the passage of water vapor through the outer wall, in mineral wool, the dew point always appears on the outside of the mineral wool layer. Since the final layer on the contact facade made of mineral wool is highly vapor permeable (on a silicate or silicone base), moisture also passes through the final layer and thus does not remain in the wall itself. It is available in panels for smaller installation thicknesses and in lamellas for bigger ones.

The thermal conductivity of EPS and MW panels is quite comparable, but they differ in other properties, such as flammability, sound insulation, vapor permeability and, last but not least, affordability. 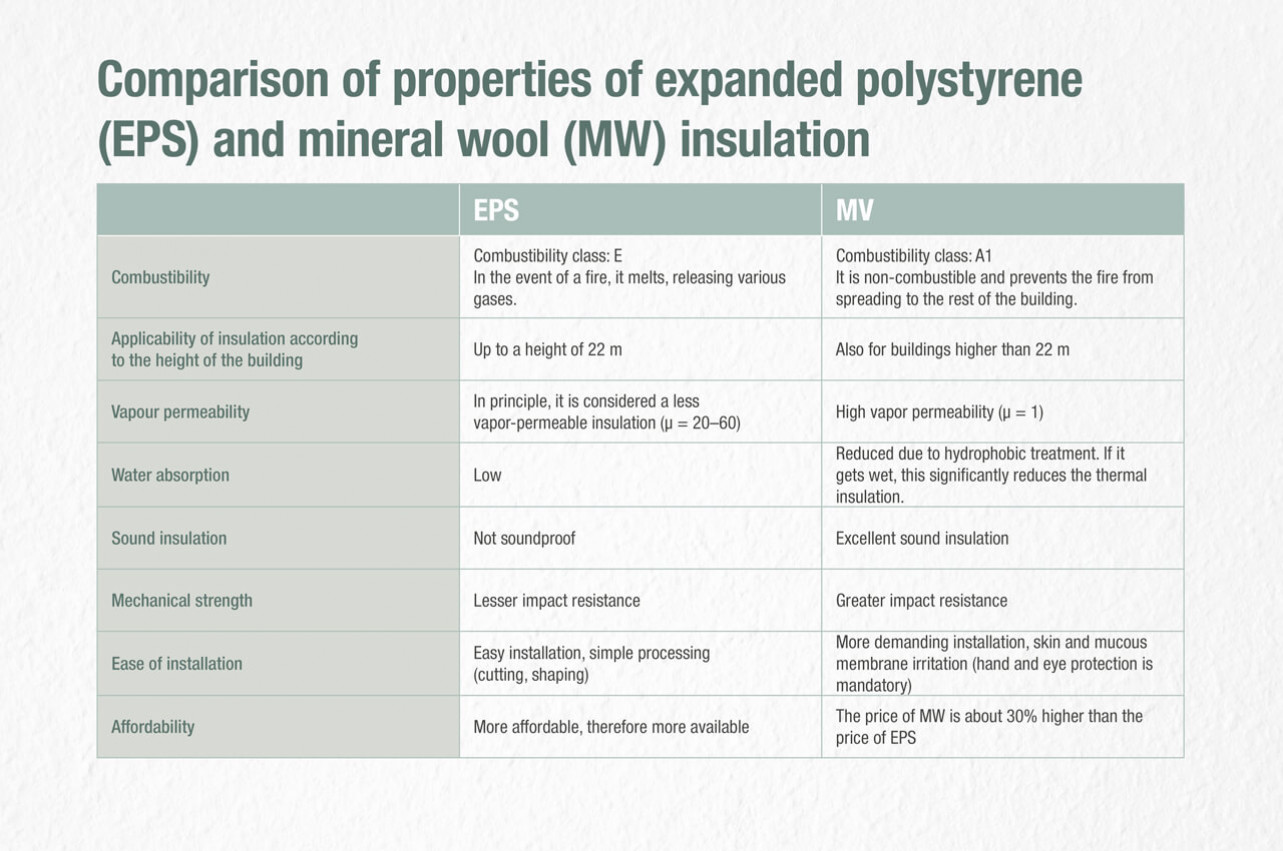 All the above properties apply to the insulation itself. However, since the insulation panels are only one of the components of the contact facade or thermal insulation system (TIS), from the point of view of the efficiency of the selected TIS, the above properties depend on the entire system. The properties of the selected TIS are greatly influenced by the final layer (thin-layer plaster or facade paint). Thus, for example, the flammability of a TIS on an EPS insulation is in class B (low combustibility - the material contributes very little to the development of fire, limited flame time, no flammable particles), and the flammability of TIS based on an MW insulation is in class A2 (non-combustible - the material does not contribute to the development of fire). The mechanical strength and impact resistance from hail are greatly influenced by the method of reinforcement (we also know the double, i.e. STRONG reinforcement), and on water repellency and vapor permeability by selecting the appropriate top coat. 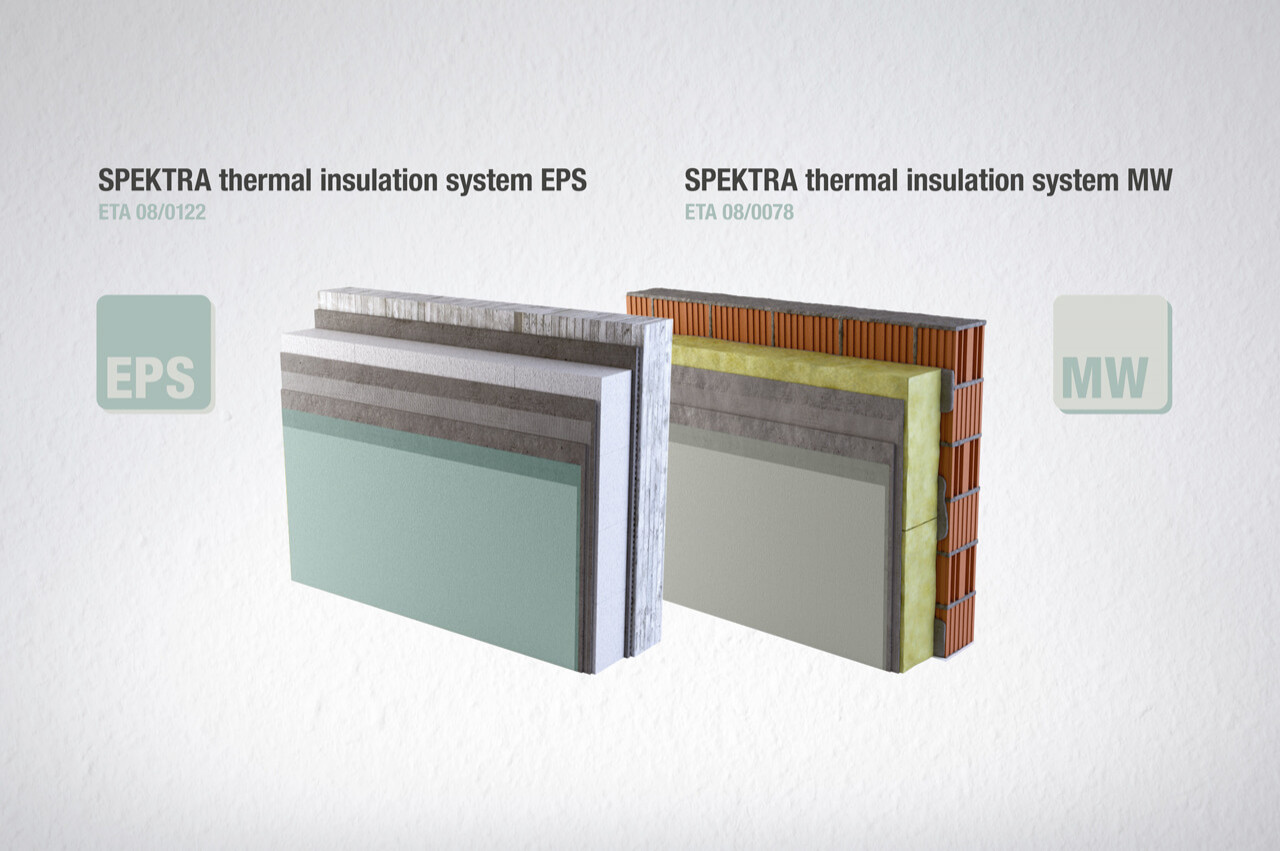 The choice of the type of thermal insulation therefore depends primarily on the height of the building, on the investor and his requirements for thermal efficiency, vapor permeability, mechanical properties, sound insulation, sustainability and last but not least on the financial investment, which in most cases is almost the most important factor when choosing not only thermal insulation but also the entire thermal insulation system.